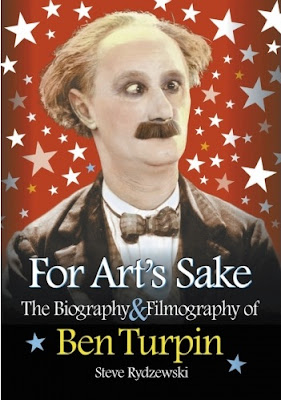 Welcome to my blogsite where I hope to keep you informed of anything and everything on one of the screen’s earliest movie comics and the Greatest Cross-eyed Comedian in the World, BEN TURPIN!

On these pages I’ll be adding new and old, and/or interesting items covered or not in my recently published For Art’s Sake – The Biography and Filmography of Ben Turpin from BearManor Media.
– 0 –
Ben Turpin at American


In late 1912 Ben found his way to the Chicago studios of the American Film Manufacturing Company, who had recently begun to produce comedies. Turpin’s association with the firm has been obscured by time and it was not until very recently, with the discovery of a reel by Dana Driskel, Filmaking Professor at the University of California Santa Barbara, were we even aware of Ben’s involvement at American. This little split-reeler comedy, The Hidden Treasure (also known as The Philanderings of Puddinfoot Pete), was released November 30, 1912:
Bill Binks sold his ranch and came home in high glee, carrying the currency, for Bill didn’t believe in banks. Bill tried tried to think of an unusual place to hide that currency and finally hit upon an old pair of boots, then Bill betook himself off without saying a word to his faithful helpmate. Puddinfoot Pete (Turpin), awakening from a delightful slumber beneath the sheltering side of a barrel, stretched himself and made his way to the eats. Repeated knocks at Bill’s door so incensed Bill’s wife that in desperation she hurled half the articles from the kitchen at poor Pete who wound up with the boots.
Getting into the boots, Pete found a giant stack of bills. Recovering from his faint, he set out on the task of making the world happier, and incidentally spreading Bill’s bills wherever there seemed no joy. He hired an automobile and set out for a restaurant. What Pete did to the chicken and the sugar is a scream. With a full stomach he hailed forth once more and seeing a woman grinding an organ fell to dancing, much to the happiness of all concerned. He left a small package of bills behind him and sailed forth in quest of all sorts of funny adventures.
Passing a grocery store, Pete stopped dead. Perspiration broke out in great beads on his forehead, for there staring at him in the face was forty boxes of soap, neatly arranged on the store front. Pete didn’t hesitate. Calling an express wagon, he paid for the soap and personally saw it taken to the wharf. Then he carefully piled it up and made one grand plunge into the middle of it, and thus did Pete get back at an old enemy. He wound up the day in a remarkable manner. Out of a new building, friends carried an injured workman. Pete followed them sadly home. To the wife he gave what remained of the money, and after a brief interval of desperate misery, struck up a tune and went back to sleep on his lumber pile. Moving Picture World, November 23, 1912

Why Turpin made his way to American may have just been a matter of needing work. Surely he had friends in directors Gilbert P. Hamilton and A. M. Kennedy, both former Essanay associates, who may well have helped Ben secure employment. However, Turpin’s association as actor or otherwise with American is unknown this early in my research, although it is known that Ben also starred in the company’s next release, Mrs. Brown’s Baby.

Posted by Steve Rydzewski at 6:15 PM

Steve Rydzewski
Philadelphia, Pennsylvania, United States
Professionally, I am a graphic artist/illustrator whose hobby and fascination is the life and career of Ben Turpin.